Biaggi's is a family friendly casual Italian restaurant. When I was going to school in Normal, IL Biaggi's was the place to go for a big group meal, or the place everyone took their parents when they came into town to visit. Just about everyone ate there at least once in the collage career. Several years later I noticed a new location in Deer Park, IL and was delighted to know it was the same Biaggi's.
Their food was always tasty, service was definitely not on the top of priorities, but I always associated that to being in a college town. Some how I have still yet to visit that location. But recently I was going down to visit a Friend who moved to Galesburg, IL her ONLY request for dinner was finding a place that had amazing bread to dunk in oil with cheese. Seemed like an easy enough request to fulfill. I looked up Italian restaurants, and find that there was a Biaggi's in Peoria, and they did gluten free!

Since we were already going to Peoria for the day, we made sure dinner was at Biaggi's. First off, the service was much better then it was at the one we'd go to in college. When I asked for the gluten free menu, the server nicely pointed out that they could bring me my own gluten free bread, with oil and cheese. I was speechless, someone else responded "Sure she'd love some." I was not expecting it. When they brought it out, I asked if it was prepared separate, and that it was gluten free. They advised that with any dual kitchen there is a risk of cross contamination, but they take every precaution they can to make sure it's safe. It was so yummy! Totally ruined my appetite for dinner, but I was OK with that. (mean while, my friend was on her 2nd basket of bread, dipping it in the oil). 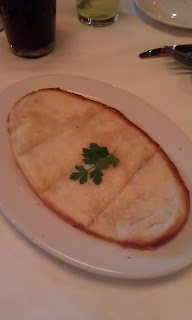 It was a bit flat, but that's why they call it flatbread right?? :)
They had quite a large menu, there were only a few appetizers, but they had pizza's, salad, entrees, and even a listing of sauces that you could have on the pasta of your choice. My favorite dish is mac and cheese, and they had cheese sauce listed as a gluten free sauce. 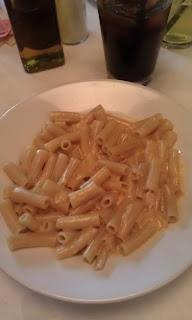 Their menu delighted me with the selection of meals available that all sounded so good, I am looking forward to checking out the location closer to my house. Over all give them 4 dragonflies on my rating scale of places to dine out.

﻿
Posted by Dragonfly Gluten Free at 8:09 AM