I had tried Betty Crocker's mixes when they came out knowing the brand and having baked with them regularly growing up. We got their cookies figuring its the easiest and we had tried other cookie mixes recently so we gave them a shot. At that time we agreed as a family they were OK.... Not great, just OK, they tasted gluten free, they didn't taste the same as other chocolate chip cookies. 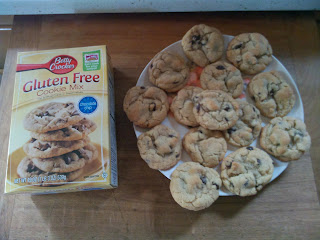 Fast forward 2 years, and my parents come home from grocery shopping with a bag of Betty Crocker gluten free chocolate chip cookies and a box of their brownie mix and informed me they had a taste for baked goods. Well guess thats my cue to bake. They bought the main ingredients i could suppliment the rest. We had a couple friends over for a memorial day bbq... But then it felt the need to be cold and rainy, so we ended up in doors watching a Cake Boss marathon. So i whipped up a batch of cookies, since we were drooling over the fancy cakes. Fresh out of the oven they were fabulous! They melted down like normal cookies, (i've had several mixes that were like cement to work with, and the shape of the dough blob you drop on the cookie sheet is the shape that comes put of the oven.)
These melted out nicely, and were very good, fresh out of the oven. We had some left, so we put them in a tupperware and put them on the table the next day. The day after they had the grainy taste i remembered from the first time we tried the mix. I was disappointed by this, they were so good, fresh out of the oven. But i guess knowing that, my expectations are set. Though this is still not my favorite, i know it can work in a pinch.
Posted by Dragonfly Gluten Free at 9:15 PM No comments:

I have stalked every recipe I can find on how to make these amazing pastries for myself. Every so often I get a craving for something I remember eating in my Pre-Celiac days that I can't shake the craving for it, until I bust out my cookbooks and find a way to make something similar to satisfy my craving. Poptarts are one of them.
I was ecstatic when I heard Glutino's was making gluten free breakfast pastries. I started to stalk my Whole Foods until I was able to find them in the store. The only thing they were missing was the frosting on the top. (I loved the cinnamon frosted ones. I could eat those all day long.) 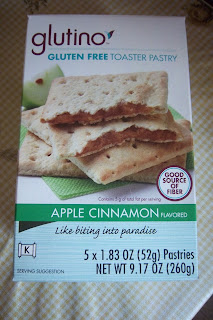 While up in Milwaukee my brother stumbled across a gluten free store, and one of the things he brought back for me were Eco-Planet toaster pastries, cinnamon flavored, and frosted! 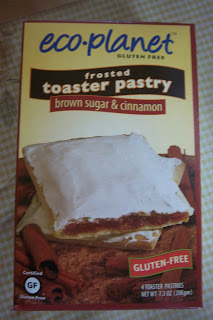 So I decided to have a toaster pastry face-off!

Glutino's -
Pro's - Each one is wrapped individually, there is a lot of filling inside, they toast quickly on the middle level, and the crust doesn't have a grainy after taste.
Con's - They aren't frosted.
Over all the Glutino's won my heart the first time I tried them, and they are worth driving out to Whole Foods to pick up
Eco-Planet -
Pro's - Frosted! Brown Sugar and Cinnamon flavor available.
Con's - They had a funny taste to them, that was making them hard to eat. Also half my pastry was empty, no filling in most of it., making it harder to eat. They are packaged 2 per wrapper.

The Eco-Planet ones were a huge let down for me. They required a longer time to get toasty and the consistency was not as palatable for me. I ended up throwing out most of it, without the filling in it. I'm hoping not all of them are like this.
Posted by Dragonfly Gluten Free at 6:42 AM No comments:

Here we go again with my repressed love for craft beer, since we are coming up on the weekend. I happen to still have several breweries on my Facebook feed, and I happen to catch a headline from Dogfish Head that they created a gluten free beer a couple years back. I was excited, so I went to my local Binny's Beverage Depot (Their slogan is If it's not at Binny's it's not worth drinking. I don't always agree with that, but hey us Celiac's a picky!) and they didn't have it. I was disappointed, I tried several other locations and no luck. It took a few weeks for me to find it in a Binny's location. It wasn't with the other gluten free beer, it was in the section with the other Dogfish Head brews.

Dogfish Heads, Tweason'ale beer is made with a sorghum base and has molasses and strawberry notes, and a hint of buckwheat honey.If you don't know Dogfish Head already, they are quirky and fun and nothing ordinary about any of their brews. 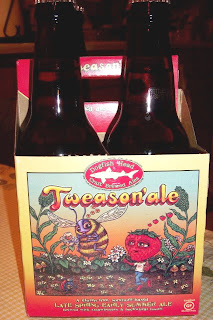 It's not your run of the mill beer, that's for sure. You get a sweet note from the honey and fruit in it. It over all is light and for me is a great summer time beer. It's available in the early Spring, around March. I usually stock up and get several four packs so when the weather gets warmer, I can enjoy a couple bottles out on the patio when grilling.

My boyfriend has mentioned it's not his favorite gluten free beer, but he does like more traditional beers, and not so much on the fruit beer side of things. In a way it reminds me of Berryweis, but a little more fruity.

I really like that their website let's you drill down to the specific brew you want, and can look for just that beer on their location finder page.
Posted by Dragonfly Gluten Free at 8:00 AM No comments:

I stumbled upon 30's by recommendation from a friend, who works with my brother the conversation started as "Hey! Tell your sister there is a place on Dundee that has gluten free pizza." That turned into, a conversation with some other friends who said "Hey let's go check out this place!" 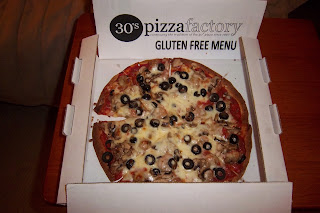 For being a small family run operation, 30's serves up a nice gluten free menu. Items on their gluten free menu include, pizza, with many toppings, pasta dishes, salads, and even a couple dessert options.
The pizzas come in two sizes 10 inch and 12 inch. They do note on their gluten free menu this is in a shared kitchen environment, which does have flour present. We've ordered from here many times, and I've never had any issues with their pizza. The pizza comes in it's own box, that looks different than the regular 10 inch pizza, and is marked on the front GF. I have noticed I do get an after taste after I eat their pizza, but the quality of the pizza is good, and the ingredients are flavorful. Plus it does re-heat nicely for a second meal. Next time I plan on ordering their pasta to see how that compares.

If it wasn't for the after taste, I would rank them higher, but this over all gets a 3 Dragonfly rating on my dinning out scale.

Posted by Dragonfly Gluten Free at 10:13 PM No comments:

While shopping in Homegoods one day I found a gluten free mix from XO baking I had never heard of them before, so I picked up a cookie and a brownie mix to try out. My brother is quite the brownie Connoisseur, so we rate mixes based on his opinion of the brownie mix. If their brownies pass the test, we'll probably like their other mixes as well.

XO baking won us over as our new complete favorite mixes. Every time I'm near a Homegoods or Marshall's I have to stop and check out what mixes they have. I love their chocolate cake to make my holiday chocolate rum cake. Last summer we heard Meijer grocery stores would be carrying them as well. Now when we travel up to Michigan we stop and check out what different mixes we can get there as well.


Since we were celebrating my brothers birthday the same day as the 2nd Stanley cup playoff game a couple weekends ago, and knowing the 1st game went into triple overtime and the last goal wasn't scored until midnight! I realized we needed something in addition to the cupcakes I was making. So I made sugar cookies as well. When I told my brother they were XO Baking he told he knew they would be awesome, no problems at all with the food addition. 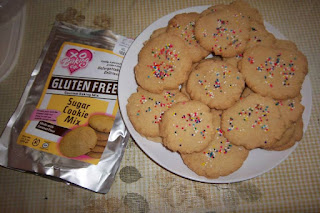 I followed the instructions on the package and only lightly rolled them in sugar before putting them on the baking sheet, and then added sprinkles to the top. Who knew sprinkles would make my cookies so popular!! They were a hit with our non-gf friends, who did finally ask if they were gluten free, and told me they were awesome. (that was after about half of them had been devoured). I finished the plate off Monday after the game, they were still tasty. We tend to find some of the cookie mixes taste a bit grainy a couple days after they sit in the Tupperware. these held their consistency and flavor. they use coconut flour in their mix, which sometimes I feel you can taste, but I think it helps make this one stand out compared to other mixes.
﻿﻿

Posted by Dragonfly Gluten Free at 7:29 AM No comments: