Every coin has two sides, just like every story, and no matter what you do, how PC you try to be, if you are trying to be funny, or eye catching, you're going to offend someone. It's a fact of life I've come to accept. Being in Marketing I know it's a fine line to walk on that you have to think of everyone when you do anything. One bad move, and it ruins you. I STILL think of Quizno's and their ad campaign where they had ugly rats in their commercials turned into a media nightmare for them with people saying they were serving rats in their food. People were so upset by it, but Quizno's thought it was funny and catchy. That campaign ended quickly. I know people who still refuse to go there "Because of those rats".

How does this relate to gluten? Well I've written before about how it gets tiresome having every late night comedian, every bad comedy on prime time, and random celebrities cracking jokes about the gluten free lifestyle. But with anything people find funny, it gets a rise out of others and keeps the ratings up, the jokes keep coming. But we are all human, and all have different likes, and some people truly are able to laugh at it and themselves and find it funny.

Last year there was a huge bump in gluten insensitivity with Hallmark Cards. They had printed a card that was "appalling and awful, and making fun of gluten free people" according to everyone who saw it. 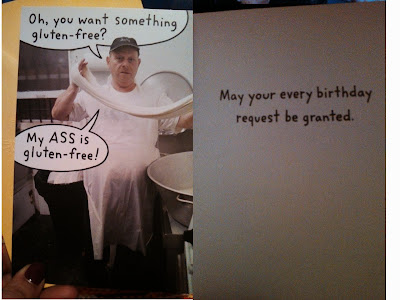 I couldn't find the card at the time, and decided to let it go.  Well the debate started again about how awful this card was. So I went to the local Walgreens and looked for it, it took a while but I found it, and when I got to read the inside sentiment; I busted out laughing.I guess this is where our experiences and our differences in what we find funny come into play. I honestly find the card hilarious. When I shared it with my family they all started chuckling and laughing at it.

Do I think Hallmark is being insensitive to gluten free people? No. I think they have someone who has a sense of humor for real life gluten free situations. You know some places you go this is what the cook/baker/chef is thinking the moment you ask the question. You know it happens. You hope it doesn't happen, but lets' be real; we know it happens! I'm sure in some form or another we've all thought this at work about something we've been asked to do.

I guess this is where you have to stop and think, is this harming anyone? Is anyone being specifically called out in this? Is there any chance it's going to cause others to think that being gluten free isn't important? If you actually take the time to read the inside of the card you'll see the sentiment to have your "birthday request be granted" So they are relating with the difficult hard to navigate world of finding gluten free, that you find something safe and you are happy on your special day. I don't see why this is "awful, shameful, and the worst thing ever that Hallmark could do to Celiac's". I feel like they are sympathizing that you're going to run into jerky situations where they are going to tell you to bug off, and you'll have to keep struggling to find gluten free.

Plus really the comment that his @$$ is gluten-free, well so is mine buddy! :)

Posted by Dragonfly Gluten Free at 8:30 AM