Growing up in Chicago, you can’t go without having a Lou Malnati’s pizza. Though I will make a huge Chicago sin… I was never a huge Deep Dish Pizza fan…. (Please don’t kill me!)

I was never a fan of so much dough. Maybe it was an early premonition that I was intolerant??? Who knows, but I was also fair weathered on it. But a family tradition was to go to Lou’s during Christmas time because their Schaumburg and Elk Grove locations were decorated real nice, and they would have Christmas Carolers singing. When I was diagnosed, right before the Holiday’s we really had to dive into how to deal with holiday’s before anything else. Our holiday tradition was still a go, because we heard they did a crust-less pizza, for carb and gluten free. I was game, and my dad said he’d go in on it too.

It was interesting… They use a sausage patty for deep dish pizzas unless you tell them you want sausage crumbles. (Honestly I don’t know anyone who likes the sausage patty on their pizza, but that’s another story.) They used that Sausage patty as the crust for baking the deep dish GF pizza. It was tasty, but it totally gave me indigestion due to how greasy the sausage was.  I did like the lake of dough it was probably a better way for me to enjoy a deep dish pizza, but none the less, it was not ranking on the top of my Must go back and have again meter.  Some time passed, 2 years roughly and my boyfriend told me he’d heard through his gluten free friends that Lou’s was now doing a GF pizza, not just sausage crust gf pizza. I told him when we are near a Lou’s I’ll try it out.

I was dog sitting a couple weeks ago (I’ve been so busy I’ve fallen behind writing right away!) and my friend lives right by the Lou’s in Schaumburg, so we decided to go check it out. Right on the menu it states they have a 9” gluten free crust that is made in a dedicated area, so it’s safe, but could be contaminated because the pizza is prepped in a shared area…. At least they disclosed that information. I informed our server I was gluten intolerant if they could please be as careful as possible, I’d appreciate it. The restaurant can get Super super busy, but we went at 8:00 on a Wednesday night, not busy so that probably helped. We each got one to try. (He’s so sweet trying out gluten free things with me to know what I’m eating, and to give me his opinion on how it tastes.) 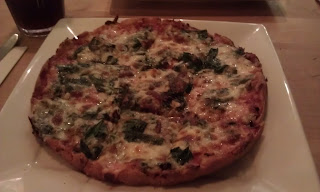 We both got Spinach and mushrooms on top, it was super tasty! The crust was a little thicker than I expected, and it was a corn base, it was Really good. It didn’t taste like Cardboard, it wasn’t tough, it was super crispy, I liked it! I could only eat half, so I got the rest to go, and took it for lunch for the next day, it rewarmed well, and was just as good the 2nd time. He devoured his like he hadn’t eaten in days, and kept telling me how good it was. I live near a Lou’s to go location, so our next trial is going to be to see if they do the GF crust there, and if they will take extra caution as well when preparing it. I haven’t gotten that adventurous yet. I give them 3 dragonflies, they have a great pizza, I would like to see a few more options on the menu, and I do wish they had a separate area to prep the pizza’s, or pre-make and freeze them, though that would limit topping options. Maybe they could make the crust, add sauce and freeze. Then they could add the toppings as ordered… Pipe dreaming there.

Posted by Dragonfly Gluten Free at 8:30 AM