The first time I was at a Cooper's Hawk Winery, was actually back when I was going through my diagnosis period, it was for a bachelorette party. I went with my best friend and we split an appetizer, I remember it was our traditional type of appetizer, everything was breaded and fried. I remember going home and feeling so sick, and thinking, the food there just stunk!!

Fast forward to knowing that I have Celiac disease, and now I know what it was about the food, it's what we ordered. Plan and simple, I decided to give them another chance since my dad found that they had a huge gluten free menu, and I was curious. I met with a friend who also has stomach troubles and was recently diagnosed with Crohn's disease, we have some of the most interesting to us, but get the weirdest look from strangers, conversations. I guess most people don't sit and talk about their stomach woe's and laugh with each other about our discoveries.

Their gluten free menu is quite impressive, they are a higher end price range, nice place to go for a nice date night out. I was delighted to see that the server offered to bring out a gluten free roll when he brought out bread for the table. Their bread comes from OMG it's Gluten Free in Frankfort, IL, they lightly toast it, so it comes out nice and toasty hot, with a side of butter. With the butter on the rolls they melt in your mouth. The roll is the same bread that's used for their sandwiches as well. I could come eat the bread and drink the wine, and be happy.

Dinner that night I had gotten the chicken parmesan which uses bread crumbs from OMG it's Gluten Free as well. It was very tasty, it doesn't come with pasta, but potatoes and a veggie. I was ok with that, their mashed potatoes are tasty. I've been back several times, one specifically for a wine tasting and dinner, another while traveling up near Milwaukee we decided to stop there. That visit I got to talking to our server and I ended up signing up for the wine club. I had tried several of their wines at this point, I like their wine, and since they have so many gluten free menu options, this really seemed like a no brainer. My family loves the large menu selection and the variety of options they have, so we are becoming regulars to their restaurants because we know everyone will enjoy a good meal here.

Here is a photo of the Anne's Chicken Saltimbocca. Amazing, we also got the Thai Chicken lettuce wraps for an appetizer, along with the gluten free bread, it was a great meal, I was so full I thought I might burst. There are 3 chicken breasts on top of mashed potatoes and asparagus. As well as the GF roll in the distance. The server had asked me while we were eating if I'd had their GF roll before I said yes, I really enjoy it, he responded, that he'd had it too, and thought it was pretty tasty. It made me feel their staff is really into knowing the gluten free foods they serve. 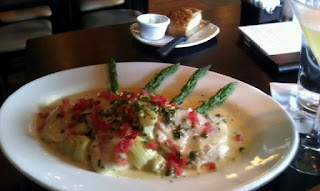 My absolute favorite dish here is the Short rib risotto, I'm a sucker for a well make risotto. Being in the wine club I had a free meal coupon, (double score; a free gluten free meal!) so the server brought out this cute little dessert plate, all gluten free! I'm not sure if this is the normal birthday dessert or if her modified it, but everything was delicious! ﻿ 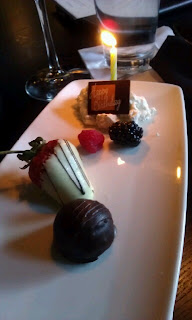 On my rating scale they get 4 dragonflies, they really know their stuff in the kitchen, and their staff is very well trained and polite.

Posted by Dragonfly Gluten Free at 11:35 AM